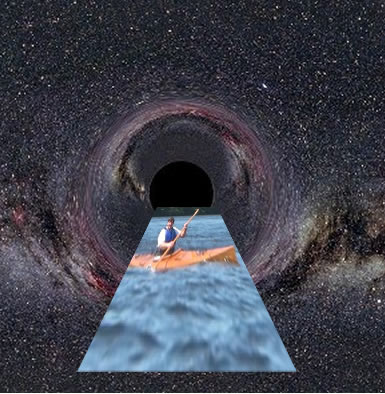 Come along with me little girl, on a magic carpet, er, kayak ride…or really, in this case perhaps you should just say no.

This note recently came from a friend of mine:  “The other day, as we were driving, Amelia started asking about black holes.  She was incredibly scared of them.  She asked me if a person was in a kayak could they really fall into a black hole!” What?!

Rewind to about two years earlier, when her daughter was four years old. We had gone together to a show on black holes at a planetarium. The show was well done in many ways, but in a dramatic scene demonstrating the “place from which nothing escapes, not even light”, a kayaker paddling along through space becomes pulled into the black hole without any way out. Because kayakers paddle through space all the time, didn’t you know?

The planetarium show was probably not designed for someone of age four. But this particularly precocious four-year-old saw it, and two years later remembered the part about the kayak being pulled into the black hole vividly enough to ask questions about it. Inquiry—a fine thing! And in this case, the inquiry led to the ability to confront the misconceptions head on. My friend explained that black holes are very far away out in space and that kayaks here on Earth won’t get sucked in, that the scene was just trying to show how the black hole sucks stuff in. Her precocious now-six-year-old replied, “well, that was really silly of them to show people in boats getting sucked in!” Ah yes, silly indeed.

It’s a good reminder for those of us working in science or education or at the interface of the two that we need to be very careful about what we present. It’s much more difficult to correct a misconception that has already been “learned”, and often difficult to pinpoint what the misconception even is.  It’s obvious that we need to plan carefully and teach things correctly and accessibly from the start. It can be tough though, so we should also watch for those times when a smart student will call us out and say, “well, that was really silly.” Indeed.